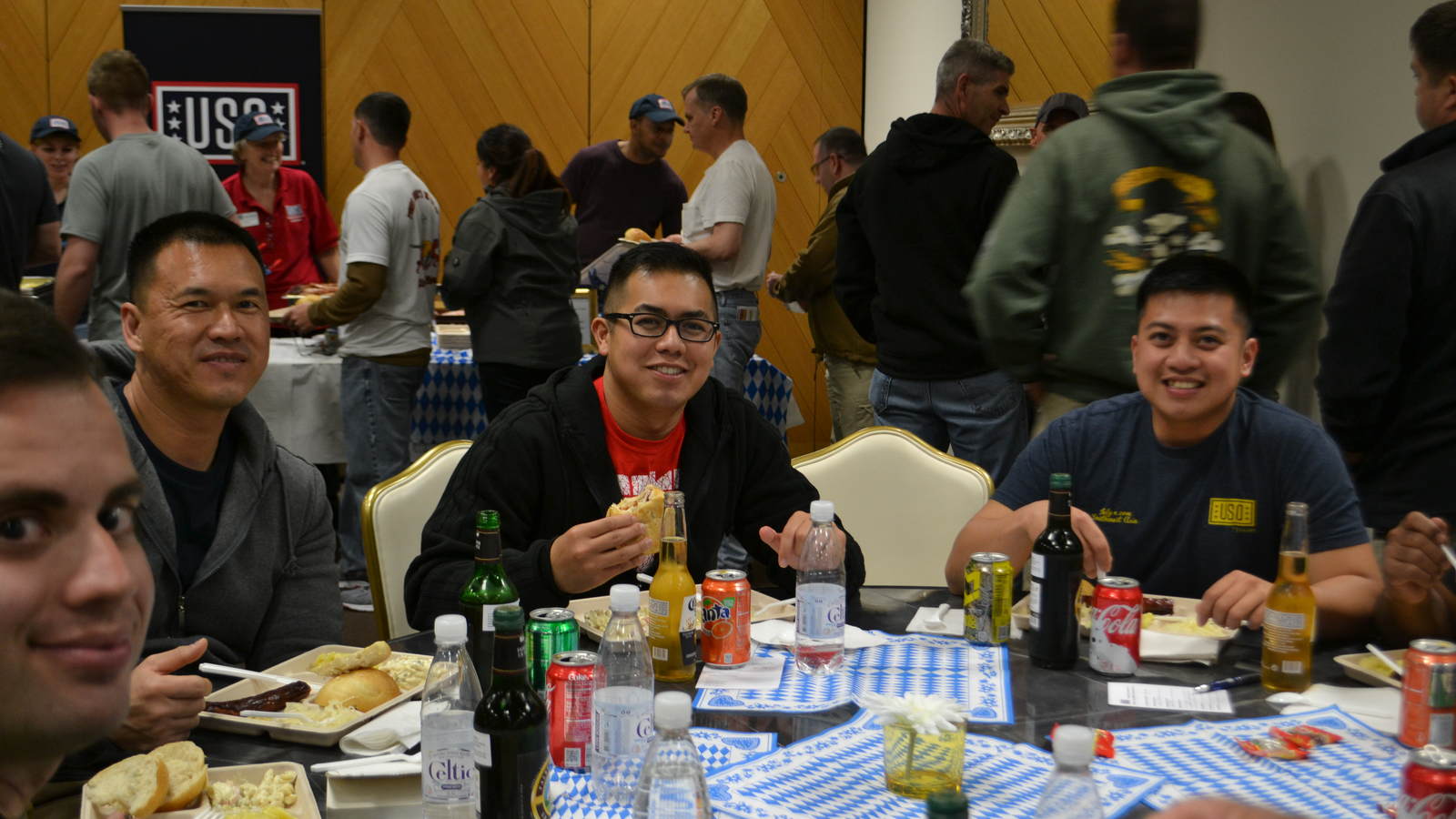 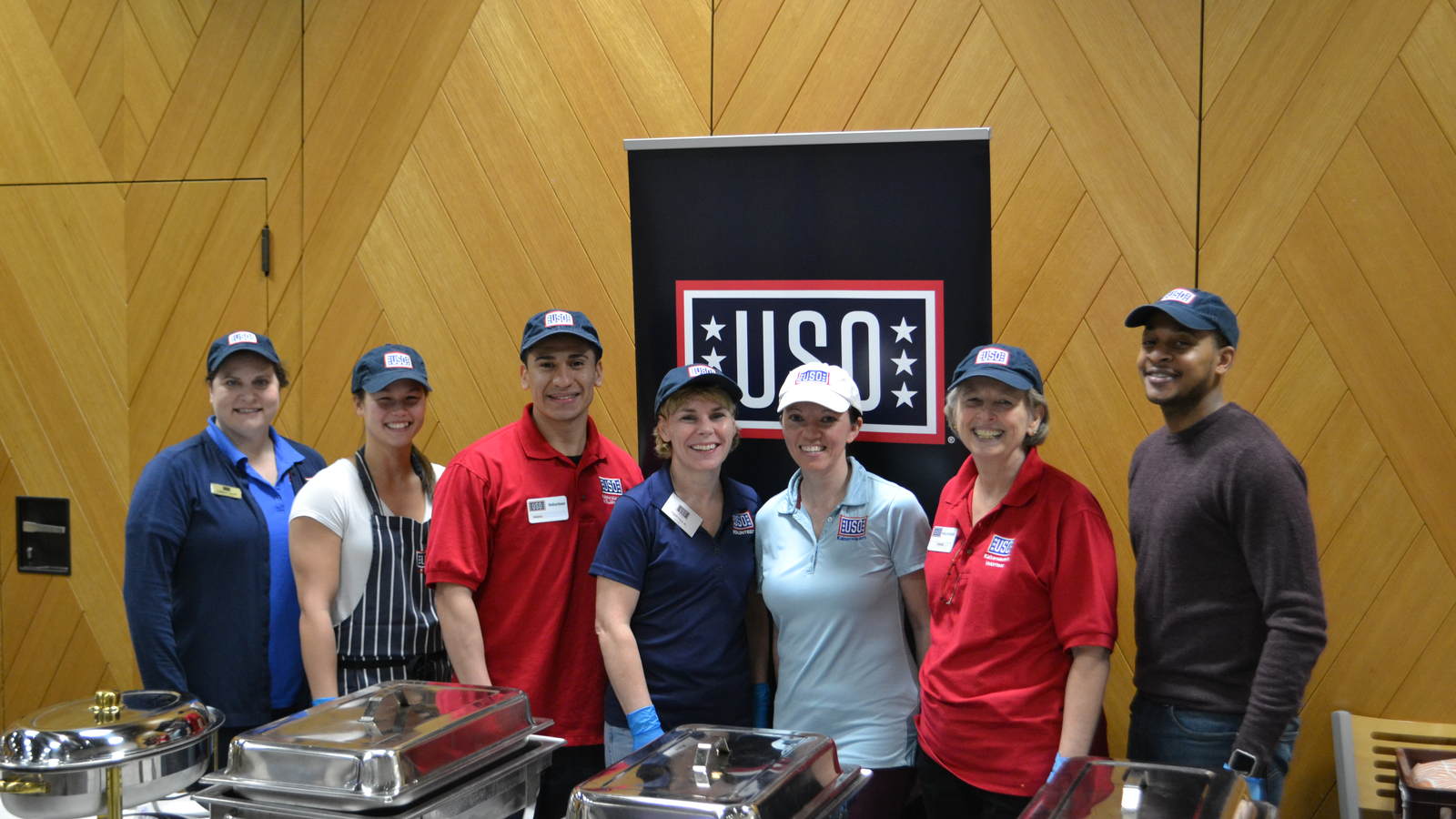 The United States Naval Construction Battalions — better known as U.S. Navy Seabees — turned 75 on March 5, 2017, and USO Kaiserslautern was there to treat over 60 Seabees back from their deployment. The grill was fired up early in the afternoon by volunteers who took time out of their busy weekend to serve.

A traditional German meal with brötchen, bratwurst, potato salad, nüdel salad, German pastries and a special Seabees 75th birthday cake were served to the hungry group. Music from the 1940s-era played softly in the background representing the year the group was formed. One Seabee commented “Thank you to all of the folks who took the time to put this on. It was well appreciated and brightened our day!”.

A special thanks to all the USO Kaiserslautern volunteers who came out to Sembach that made the event a memorable time during the group’s short stay in Germany.

Their simple motto tells the story: “We build, we fight”. From the island hopping of World War II and the cold of Korea, to the jungles of Vietnam, to the mountains of Bosnia, and to the deserts of Afghanistan and Kuwait, the Seabees have built entire bases, bulldozed and paved thousands of miles of roadway and airstrips, and accomplished a myriad of construction projects.

In December 1941, with an eye on the developing storm clouds across both oceans, Rear Admiral Ben Moreell, Chief of the Navy’s Bureau of Yards and Docks, recommended establishing Naval Construction Battalions. With the attack on Pearl Harbor and the U.S. entrance into the war, he was given the go-ahead. The earliest Seabees were recruited from the civilian construction trades and were placed under the leadership of the Navy’s Civil Engineer Corps. Because of the emphasis on experience and skill rather than on physical standards, the average age of Seabees during the early days of the war was 37.

More than 325,00 men served with the Seabees in World War II, fighting and building on six continents and more than 300 islands. In the Pacific, where most of the construction work was needed, the Seabees landed soon after the Marines and built major airstrips, bridges, roads, warehouses, hospitals, gasoline storage tanks and housing.

The Korean Conflict saw a call-up of more than 10,000 men. The Seabees landed at Inchon with the assault troops. They fought enormous tides as well as enemy fire and provided causeways within hours of the initial landings. Their action here and at other landings emphasized the role of the Seabees and there was no Seabee demobilization when the truce was declared.

Following Korea, the Seabees embarked on a new mission. From providing much needed assistance in the wake of a devastating earthquake in Greece in 1953 to providing construction work and training to underdeveloped countries, the Seabees became “The Navy’s Goodwill Ambassadors”. Seabees built or improved many roads, orphanages and public utilities in many remote parts of the world.

These “Civic Action teams” continued into the Vietnam War where Seabees, often fending off enemy forces alongside their Marine and Army counterparts, also built schools and infrastructure and provided health care service. After Vietnam, the Seabees built and repaired Navy bases in Puerto Rico, Japan, Guam, Greece, Sicily, and Spain. Their civic action projects focused on the Trust Territories of the Pacific.

In 1971, the Seabees began their largest peacetime construction on Diego Garcia, a small atoll in the Indian Ocean. This project took 11 years and cost $200 million. The complex accomodates the Navy’s largest ships and the biggest military cargo jets. This base proved invaluable when Iraq invaded Kuwait in August 1990 and Operations Desert Shield and Desert Storm were launched.

For more than 60 years the Seabees have repeatedly demonstrated their skills as fighters and builders. From the islands of the Pacific to the jungles of Vietnam, to the mountains of Bosnia and to the sands of Saudi Arabia and Kuwait, they have built and fought for freedom. In peacetime, they have been goodwill ambassadors. In peace and in war, they have lived their motto: “Can Do!”