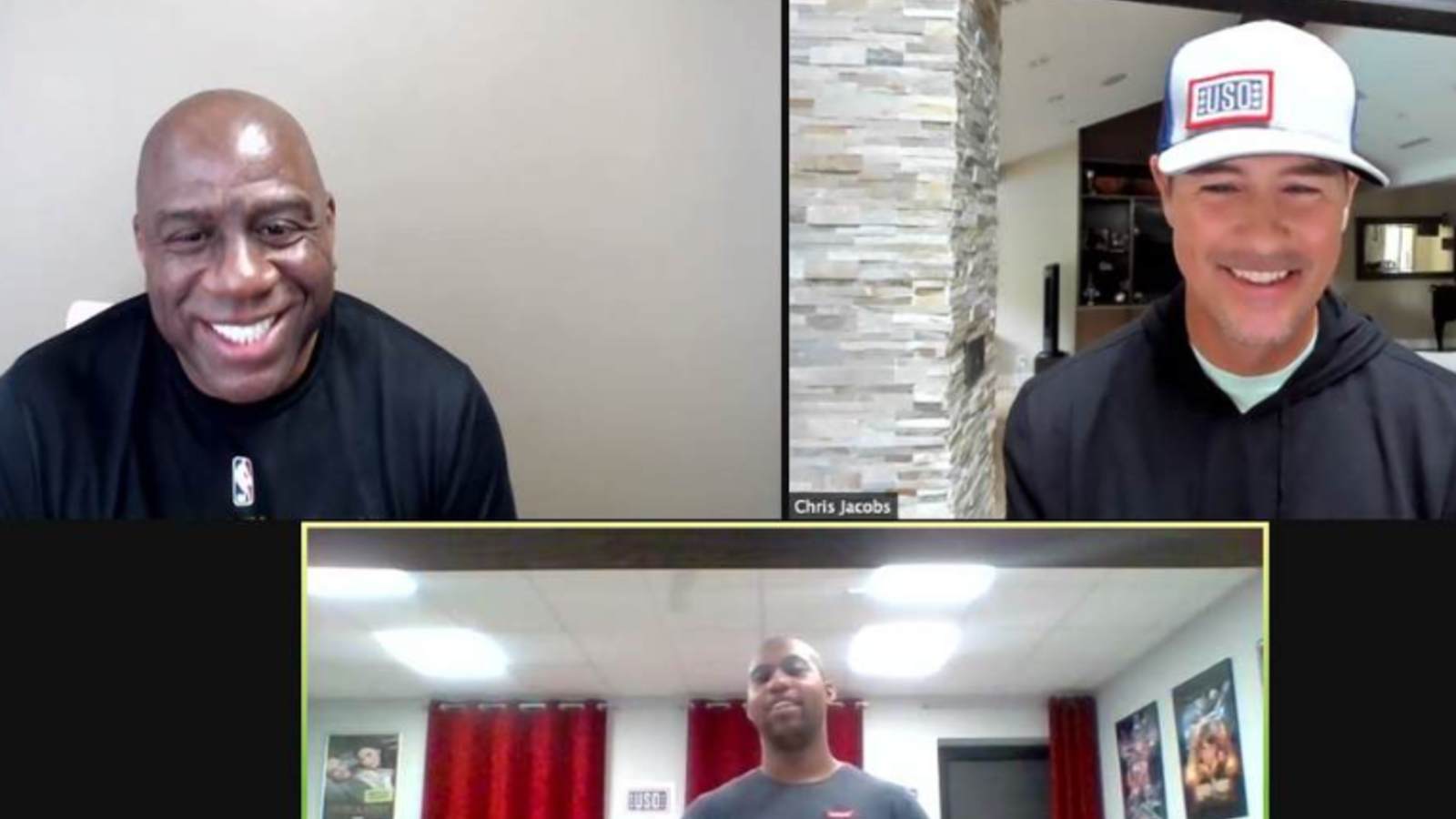 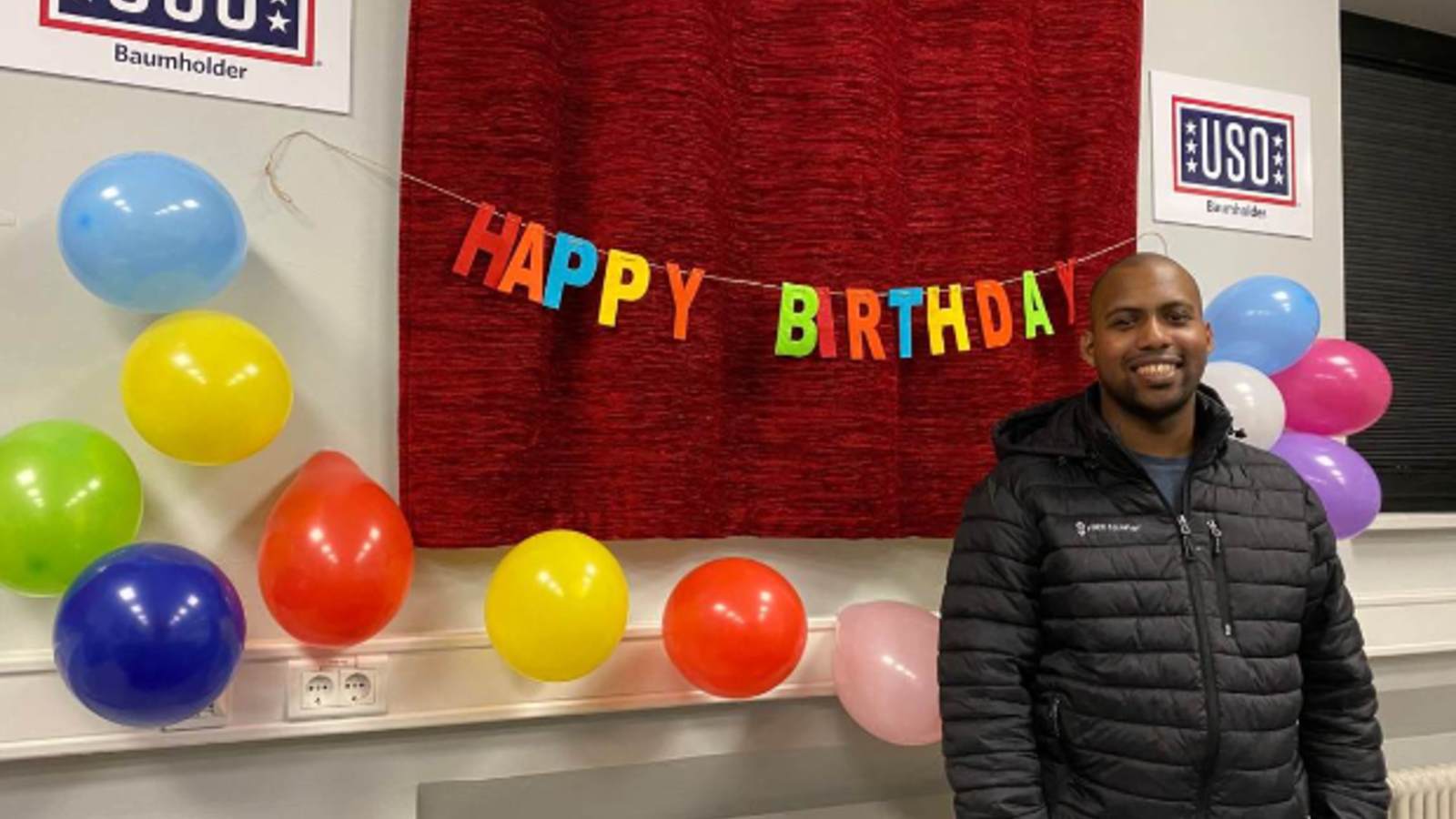 Army Spc. Kadeem Jenkins grew up watching Los Angeles Lakers games with his dad, so getting to virtually meet NBA legend and former Lakers player Magic Johnson through the USO MVP Champions series was an especially exciting way to celebrate his birthday while stationed far from home in Germany

Meeting your idol is not an everyday occurrence. Meeting them on your birthday and getting to chat with them virtually? Well, that’s even rarer! For Army Spc. Kadeem Jenkins with the 16th Sustainment Brigade’s 569 Human Resources Company in Baumholder, Germany, that moment was possible – thanks in large part to a friend’s connection to the USO.

Every day, Jenkins’ Army duties take him to the Community Mail Room (CMR), where he handles logistical support and ensures that all members of the Baumholder community receive their mail. Jenkins works here with his teammate and USO Baumholder volunteer Sgt. Caleb Florence. When Florence learned that USO Baumholder was going to be one of several host locations for the USO’s MVP Champions Live Virtual Q&A session with NBA legend Earvin “Magic” Johnson on Jenkins’ birthday, he knew exactly who to bring along — his friend, Magic Johnson fan and birthday boy, Jenkins.

Growing up, some of Jenkins’ fondest childhood memories included watching the Los Angeles Lakers’ games with his dad. As a soldier, he was inspired by Johnson’s success and the compassion he showed while giving back to his community. So, when the opportunity to participate in USO Baumholder’s Live Q&A with the athlete came around, Jenkins was excited to see that the event was coincidentally taking place on his 24th birthday, and he shared this news with the USO team. This led the USO Baumholder team on a mission to ensure Johnson would be able to personally wish Jenkins a “Happy Birthday.”

With the birthday banner hung up and the system check underway, Florence, Jenkins and other guests made their way to the USO Baumholder center. Many of the attendees were nervous about chatting with Johnson live, but Jenkins was eager to meet his childhood hero. The Live Q&A went underway and Johnson provided candid and engaging conversation as he communicated on a personal level with each service member. His messages focused on staying positive, never giving up and always maintaining your sense of humor. As service members at centers around the world had their chance to speak one-on-one to Johnson, Jenkins and the rest of the crowd at USO Baumholder waited patiently as the last center on the roster to chat with the basketball player.

Then, the moment finally arrived. Jenkins was the last service member to have a chance to ask Johnson a question and immediately, Johnson welcomed Jenkins and shared with other attendees tuning in from around the world that Jenkins was celebrating his 24th birthday. Jenkins grinned ear to ear hearing Magic Johnson not only wish him a “Happy Birthday,” but also sharing anecdotes and providing candid feedback to Jenkins’ question.

As the Live Q&A wrapped up, Jenkins could not stop talking about how incredible it felt to have had the chance to ask Johnson a question. He immediately called his family to share the unbelievable news –he’d had a “Magic”-al birthday after all.