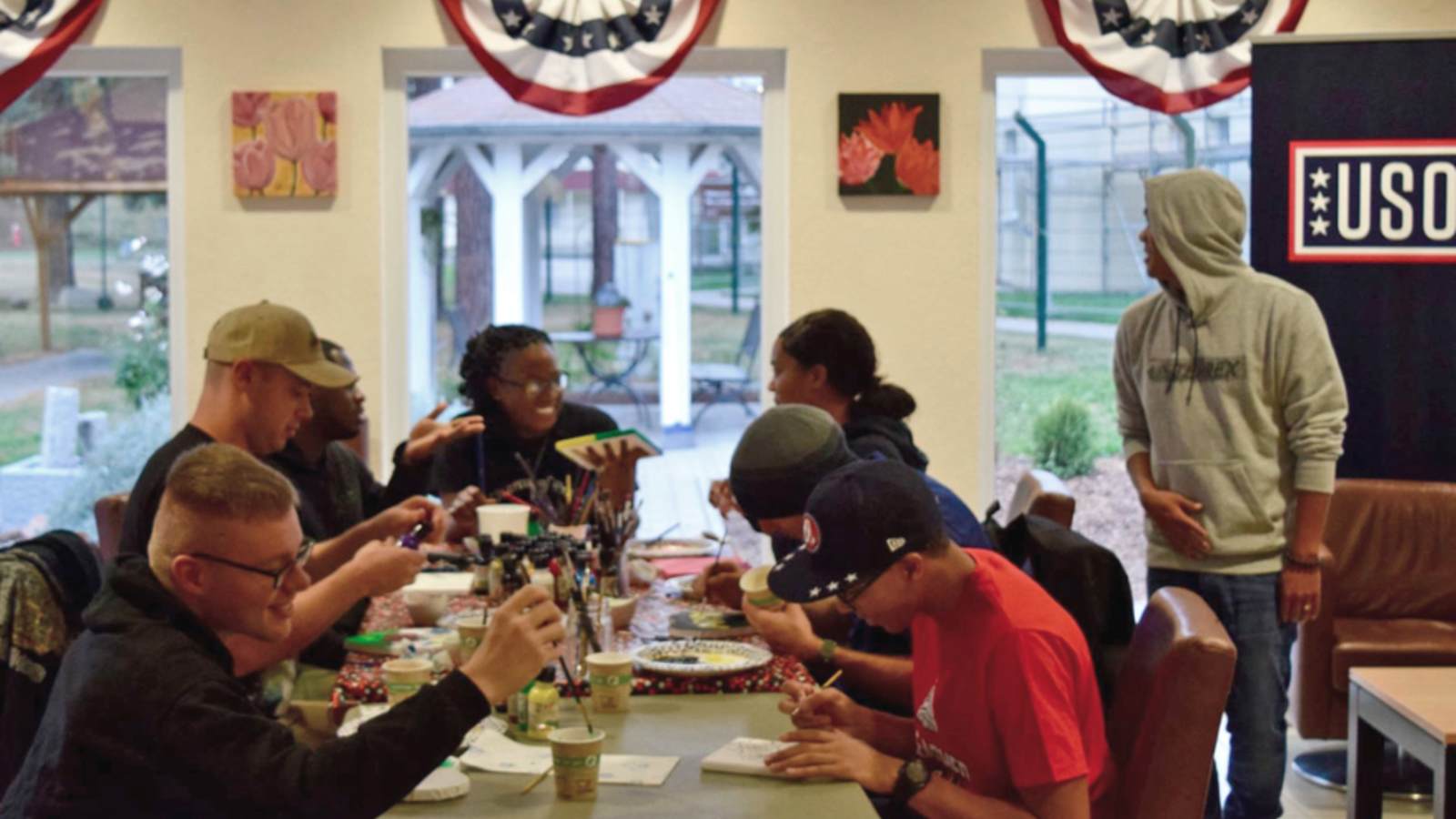 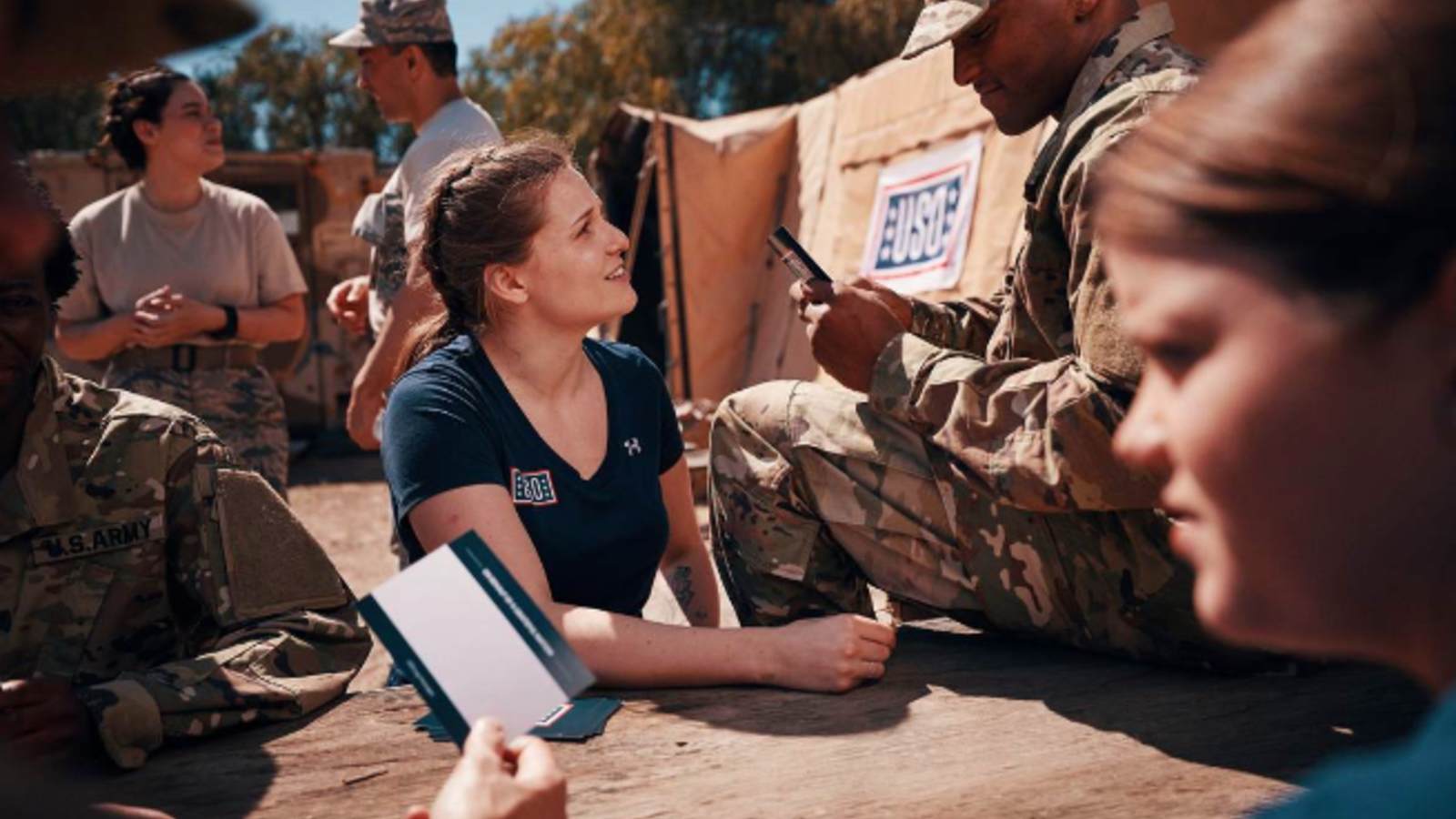 When a service member sees a USO center, they know that from the moment they walk in, they can depend on the center to have a safe, supportive environment, no matter if they are in Pennsylvania or Poland. Photo credit USO Photo. 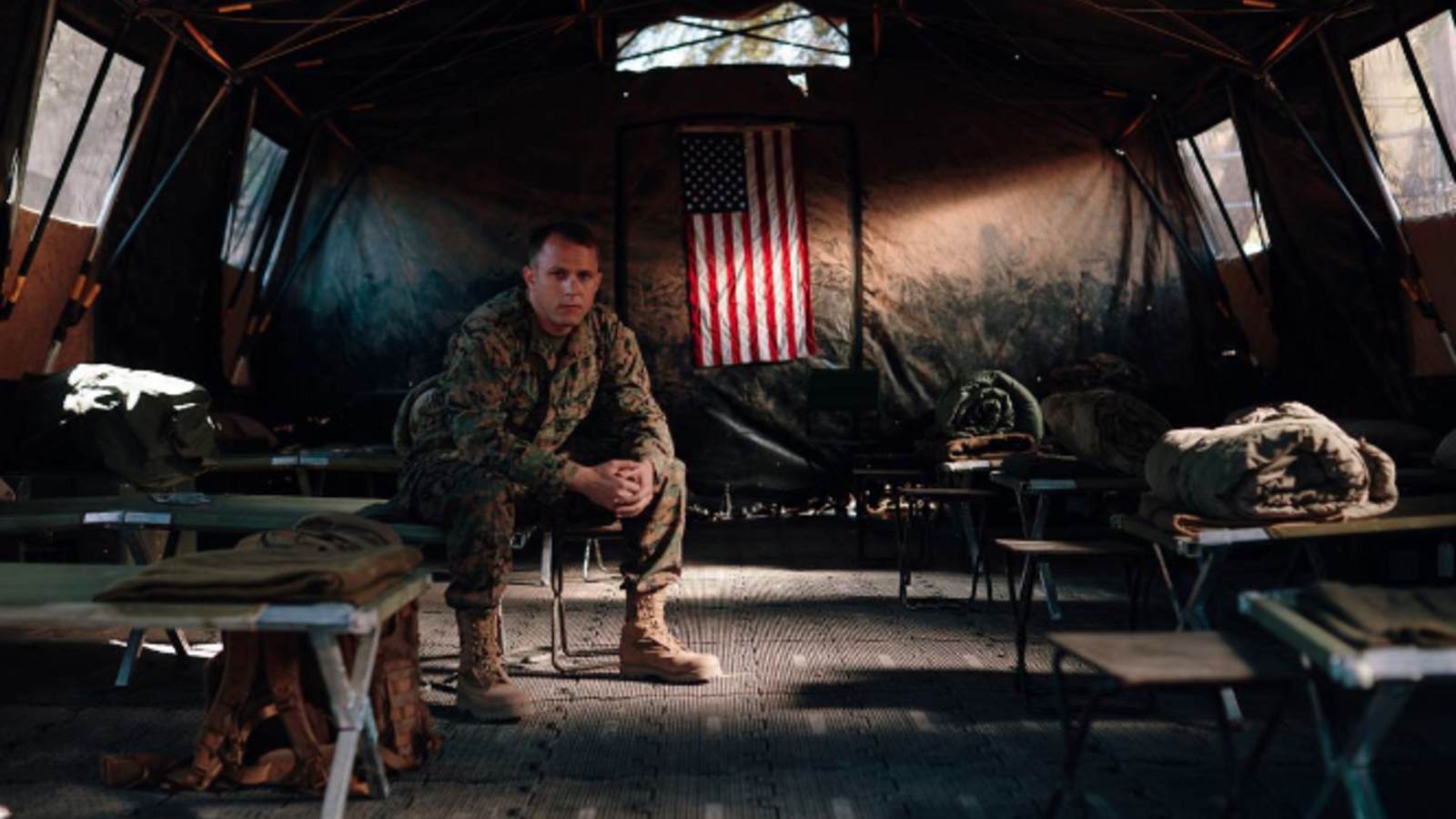 Currently, suicide rates among active-duty military members are at an all-time high and have been increasing over the past five years at an alarmingly steady pace. Here's how the USO is trying to help. Photo credit: USO Photo. 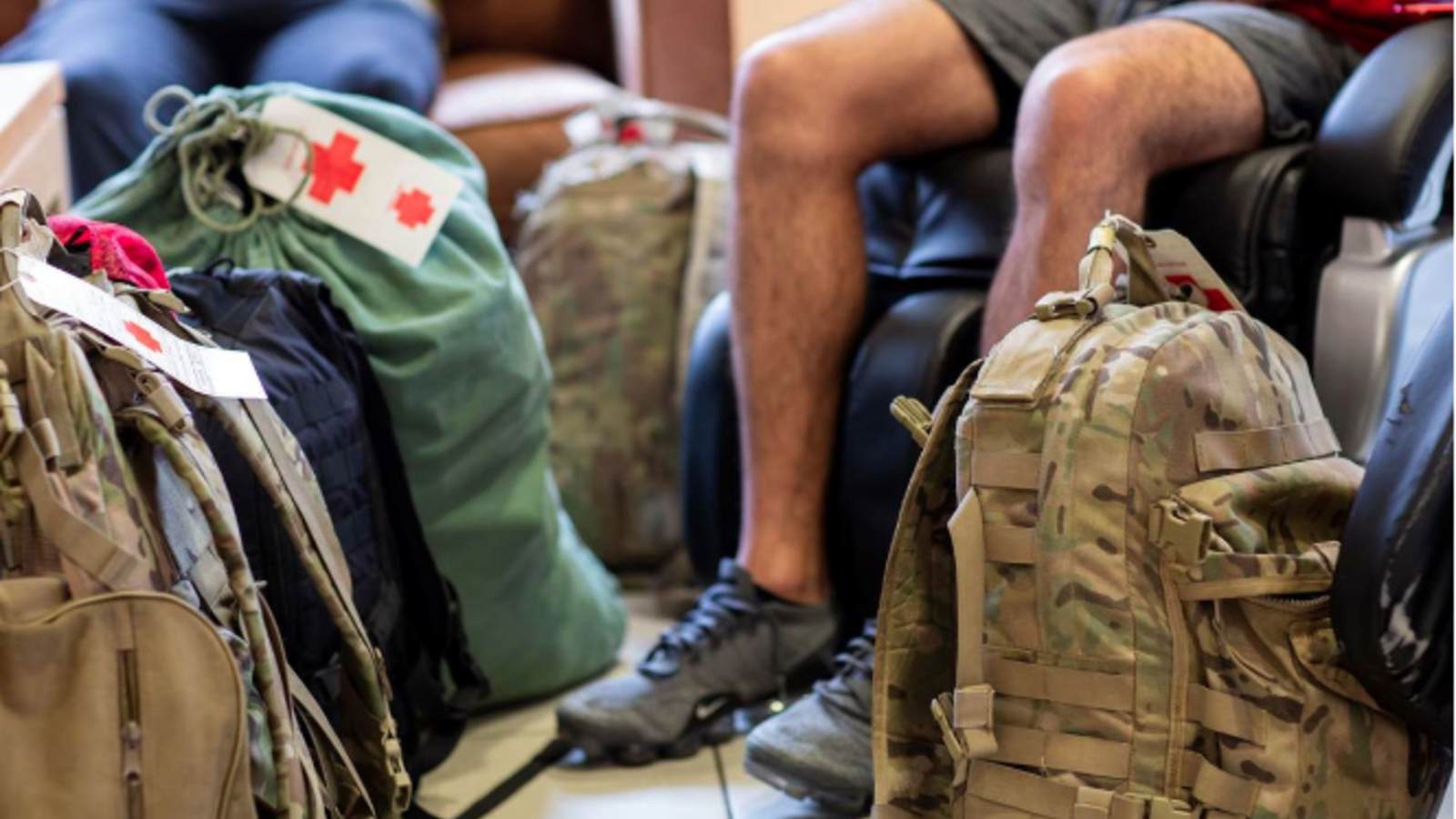 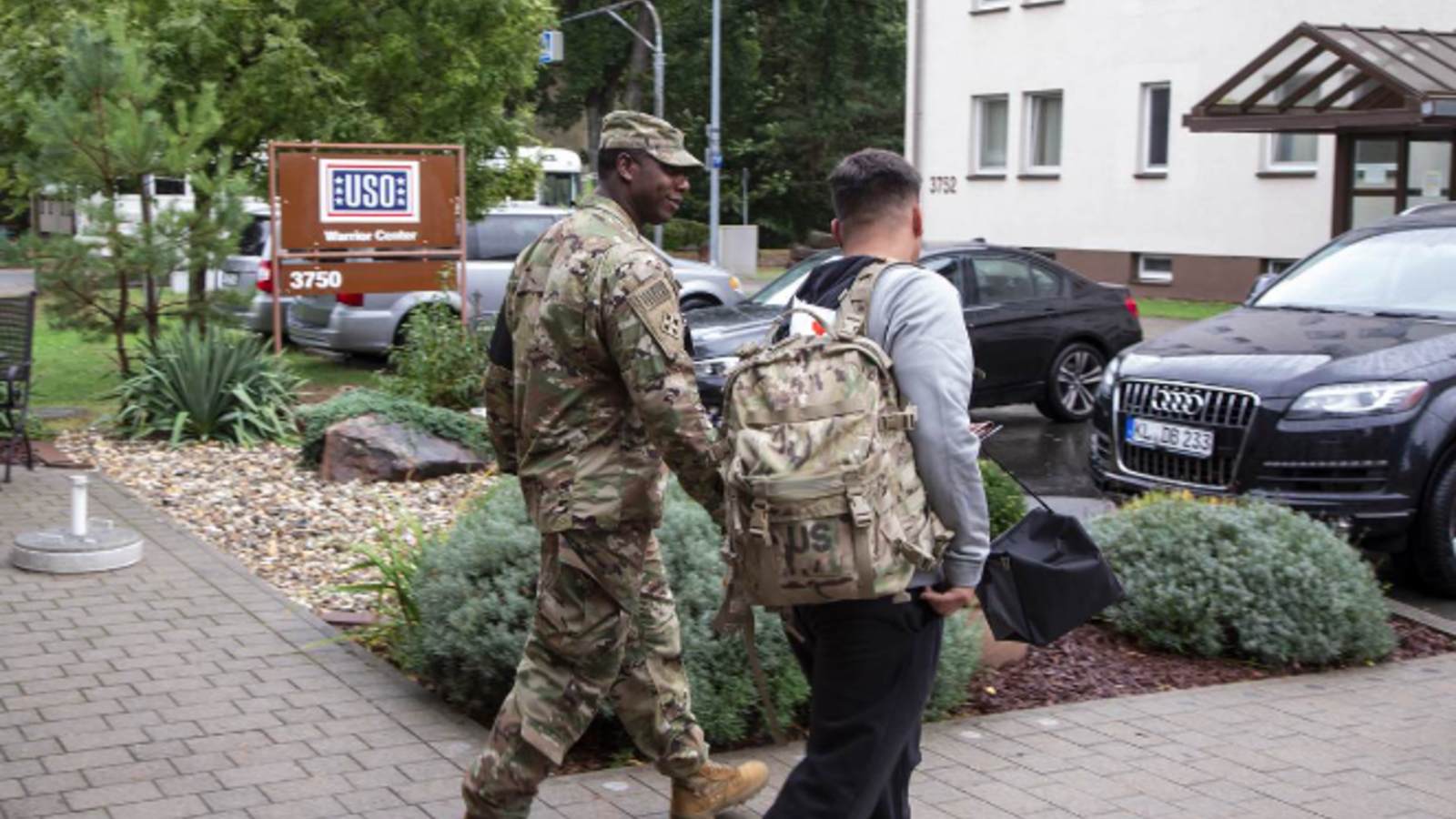 A liaison walks his patient out of the USO Warrior Center. 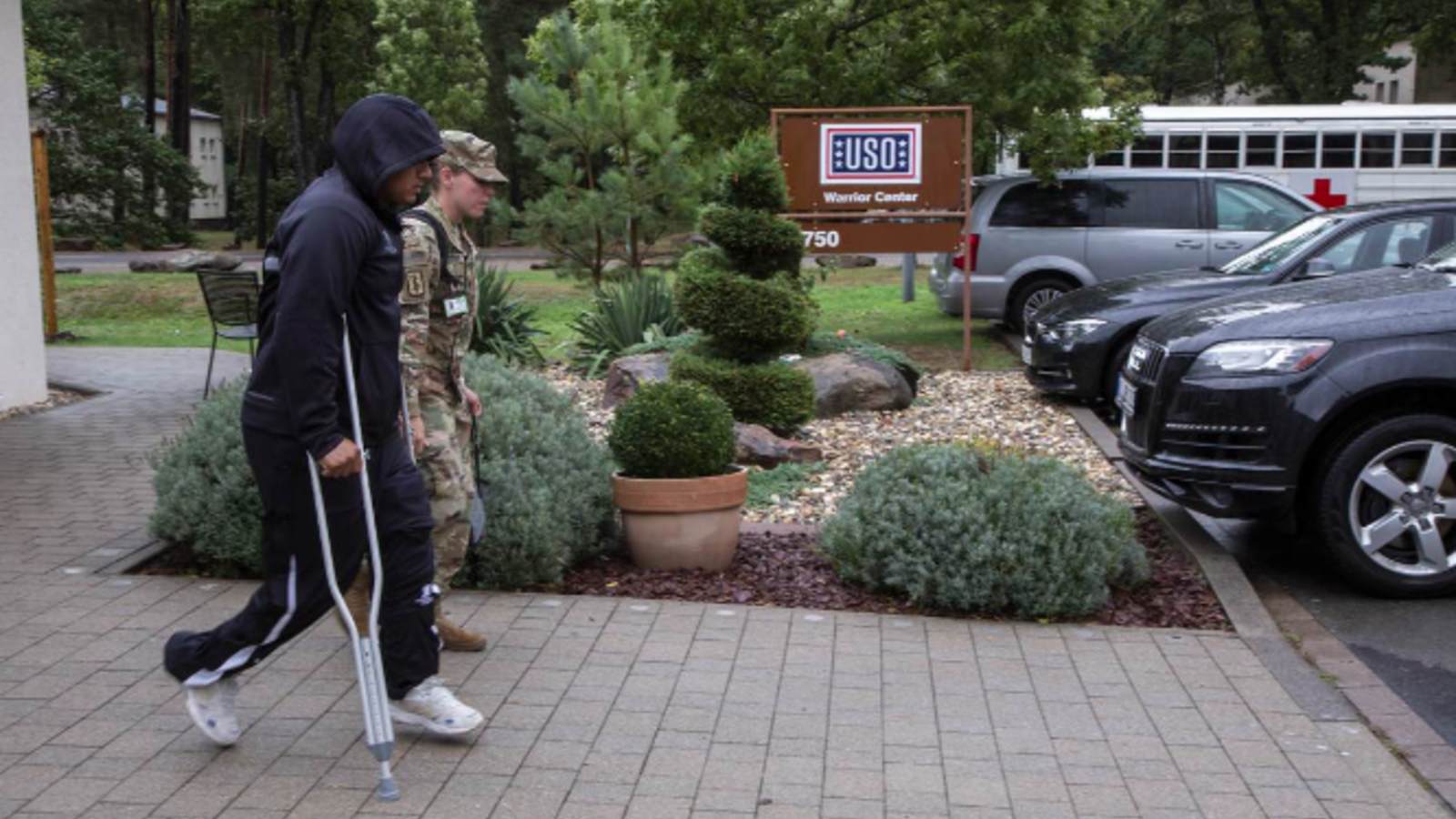 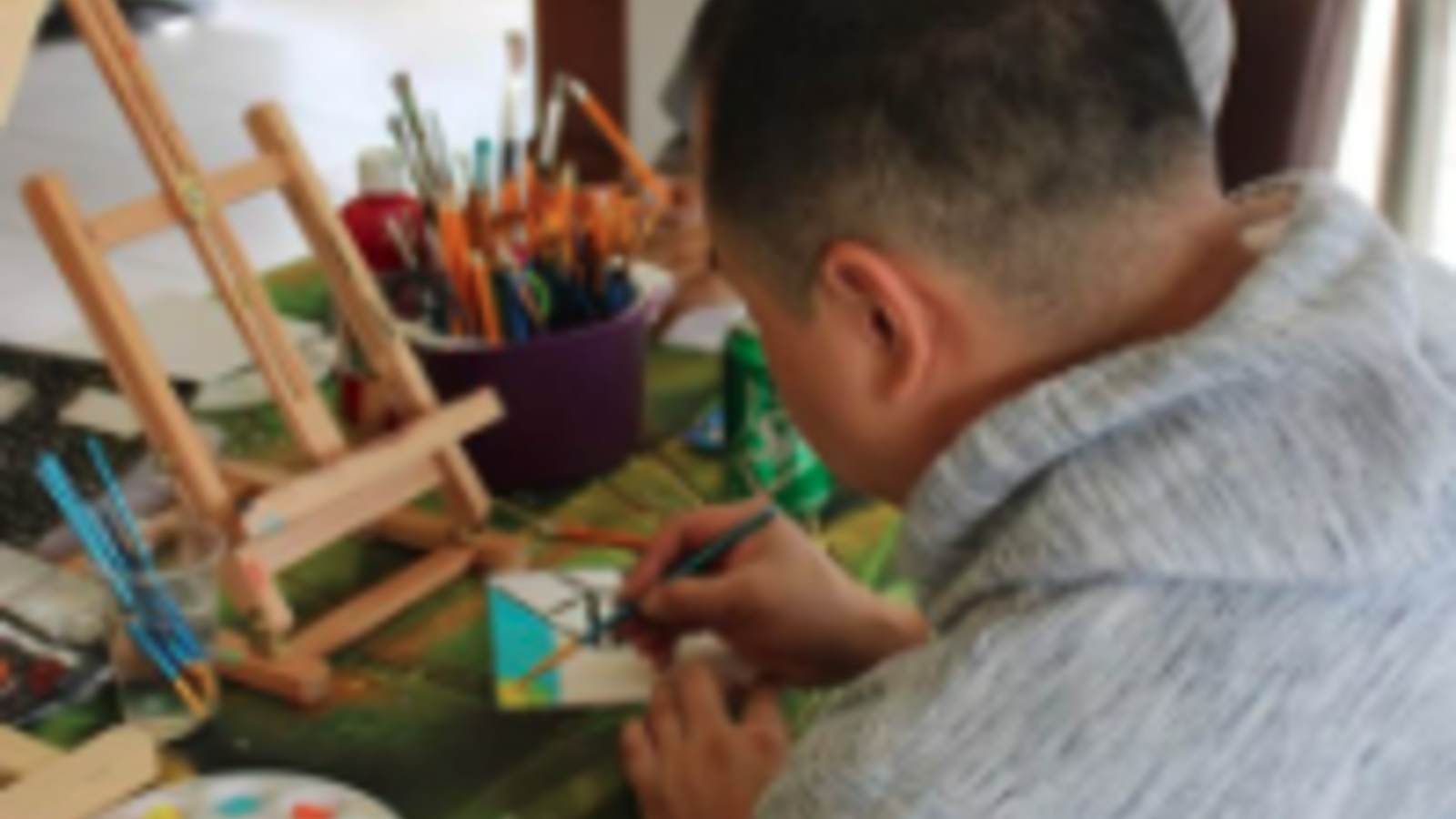 Programs at our USO Warrior Center include arts and crafts, music lessons, painting, yoga and cooking to help our wounded service members in their recovery. Photo credit: USO Photo. 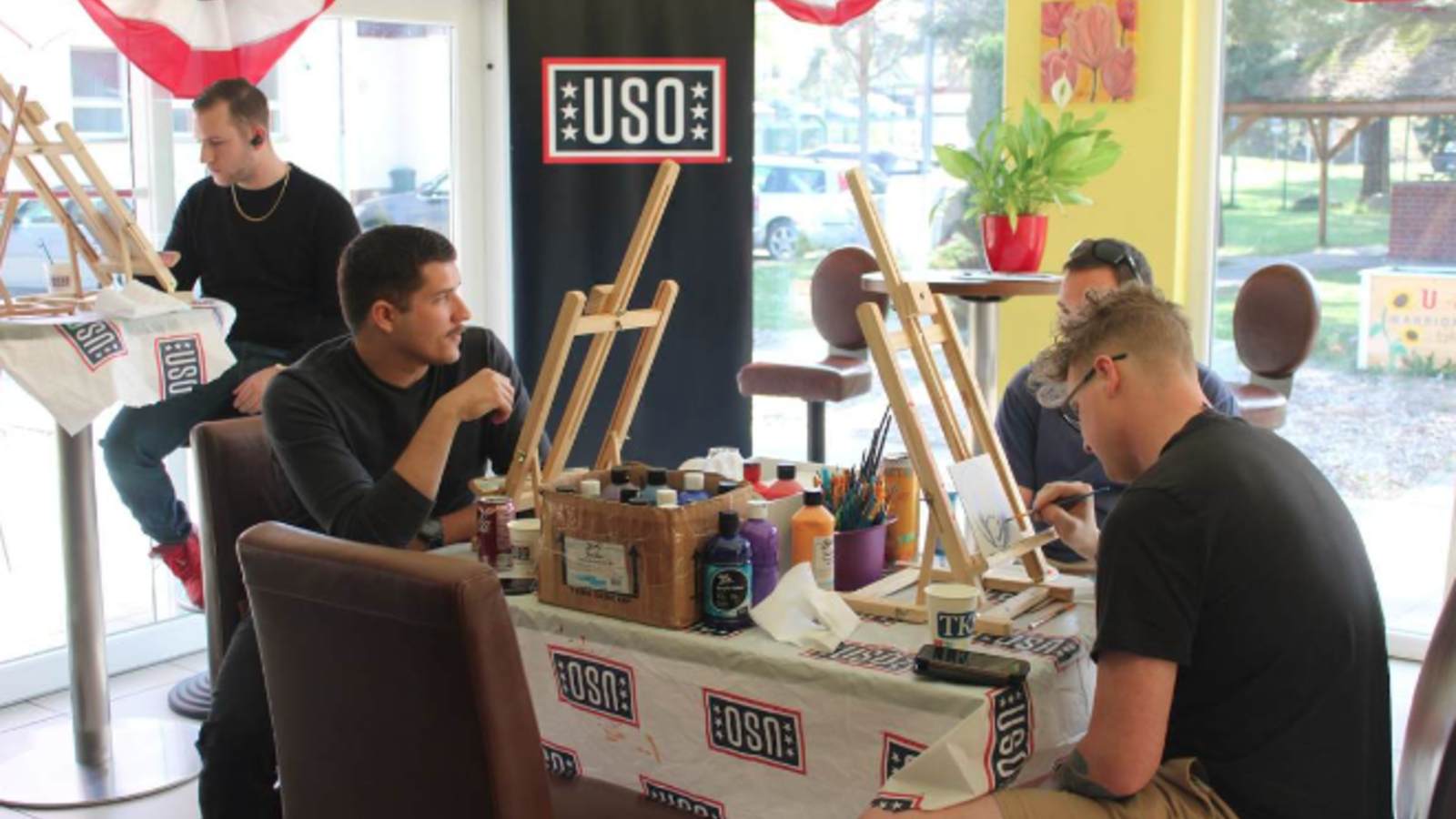 The USO Warrior Centers are beneficial for service members looking to engage in activities and form support networks with troops in the midst of their recovery. 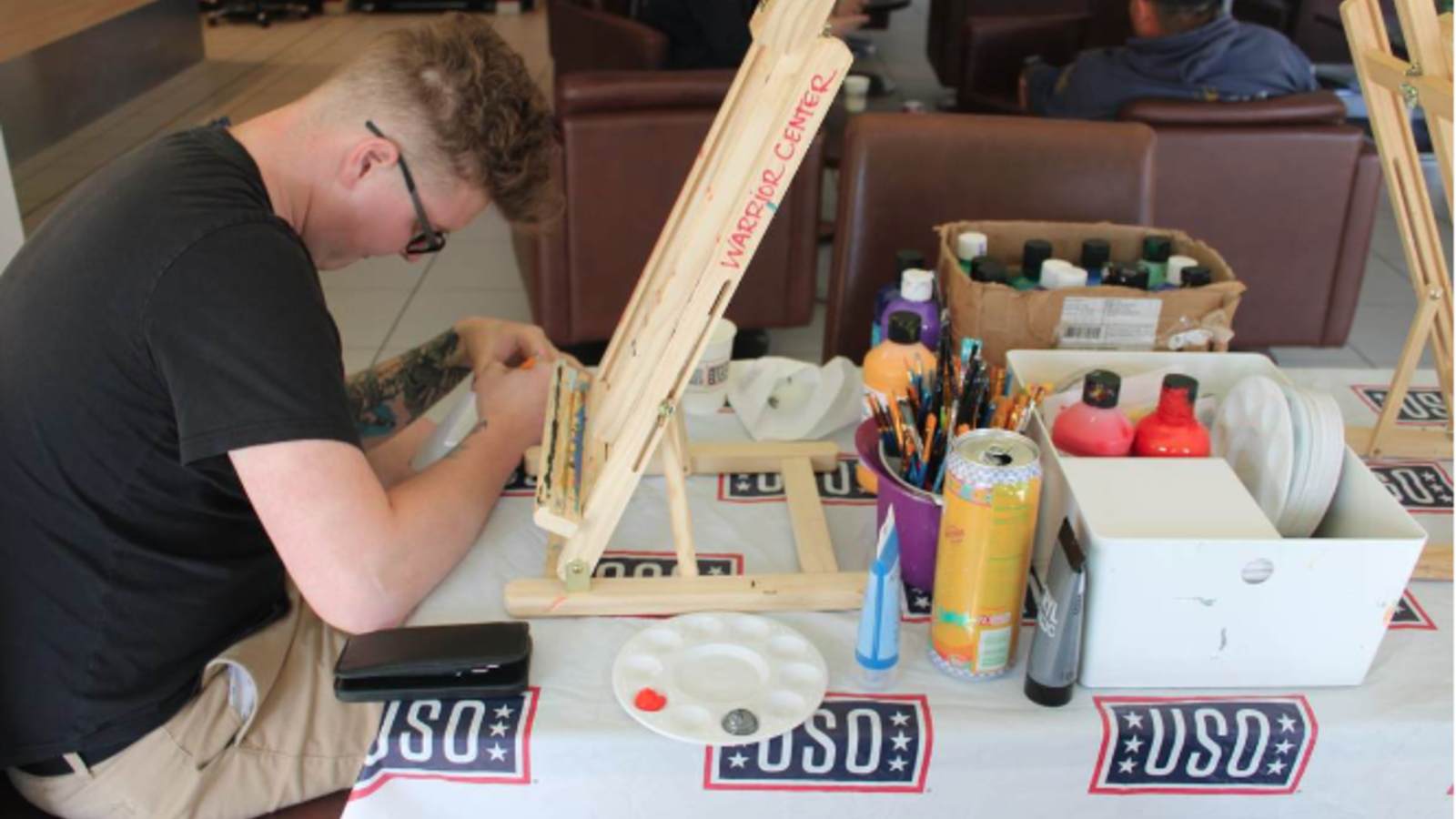 Through activities such as painting, service members have an innovative way to relive stress and pass time during their recovery. Photo credit: USO Photo.

When we talk about the many challenges of military life, we often talk about the ones more easily understood, such as separation from family and loved ones during long deployments, the instability that comes with multiple moves to new duty stations every few years or the difficulties military spouses can face when trying to find employment.

But there is another challenge that is not discussed as often, slightly more complicated and not quite as easily solved: the struggles of mental health and morale within the ranks of our nation’s military.

The USO aims to support the military community through all steps of the military journey, including that of their well-being and recovery from injuries – those visible and invisible. And while there is no simple solution to the challenges of mental health in the military, the USO has created centers and programs designed specifically to alleviate the strain of mental health issues on service members all around the world.

How Mental Health Affects the Active-Duty Service Members Between September 11, 2001, and 2021, more than 30,177 active-duty service members and veterans died by suicide. In those same 20 years, 7,052 active-duty service members were killed in combat in the conflicts that followed the attacks. In other words, four times as many military personnel have died by suicide in the two decades since 9/11, compared to those who died in combat in post-9/11 conflicts.

Several factors can lead a person to commit suicide, but for active-duty service members, there’s an additional layer of potential stressors on top of the regular ups-and-downs of life that puts them at risk. Military service – as well as repeated deployments to the front lines – can expose many of these service members to additional physical and mental trauma and stress.

But even for those not at a risk for suicide, or the 1 in 4 active-duty service members who show signs of mental illness, the realities of military life can still take their toll on the general well-being of your average service member.

These trends are extremely troubling for our nation’s service members, their loved ones, supporting military members and the nation as a whole. It is an issue that deserves attention – and it is one that the USO, as a military support nonprofit, takes very seriously.

How USO Centers Support Mental Health and Well-Being Among Service Members For decades, the USO has stood by the U.S. military both at home and abroad. When we say “we go where they go,” we mean it; USO centers – all 275+ of them – are located everywhere from Houston, Texas, to Djibouti, Africa, to Okinawa, Japan and beyond.

Being able to reach our nation’s service members in almost every location in which they serve, even on the front lines or in remote locations, is crucial. Service members of each branch, as well as their families, know that no matter where they are stationed or deployed to next, they will always be able to find that familiar red, white and blue USO logo above a welcoming door and have a place to turn to.

That sense of familiarity at each USO center is important because above all else, the USO is a home away from home for the military community. When in a distant location or about to carry out a mission downrange, having the familiarity of a homelike setting can make all the difference for our service members.

Inside a USO center, service members can enjoy this home-like atmosphere with comfortable couches, televisions, gaming systems, stocked bookshelves and other thoughtful touches. Here, they can spend time with one another or connect with family and friends back home through free Wi-Fi, phone centers, computers and the USO Reading Program. These connections to loved ones can help service members weather the storm of spending months – or even years – apart from their families while on deployment.

In combat zones, USO centers are a safe haven for service members on the front lines who simply need a place to recharge and think about anything other than the fact that they are deployed.

Regardless of the location, USO centers aim to provide service members with a safe and supportive environment where they can feel at home and connected to others.

According to the World Health Organization (WHO), having a safe, supportive environment plays a large role in suicide prevention. When people feel secure in their surroundings, they experience less anxiety and depression, improve their physical health, have fewer instances of substance abuse and experience an overall improved quality of life and life expectancy.

Studies have also shown that “social connections can act as a buffer against the impact of stressful or negative life experiences on mental health.” The International Association for Suicide Prevention and the World Health Organization (WHO) also cites social connection as a crucial method in suicide prevention.

This is exactly why connection and providing a home away from home is at the heart of everything the USO does for active-duty military members – and why it is crucial to have USO centers located near military medical facilities for wounded, ill and injured service members in recovery.

The Crucial Mission of Supporting Military Mental Health at the USO Warrior Center in Landstuhl, Germany “Always be kind.”

Geno is a veteran himself, having served 11 years in the U.S. Air Force, so he understands the ups and downs of military life. This experience in the military has equipped Geno with the unique, firsthand knowledge necessary to supporting the wounded, ill and injured service members who come through the doors of the USO Warrior Center in Germany – but regardless of their injuries, visible or otherwise, kindness is always the first step.

Although all USO centers strive to bolster the morale and well-being of the military community, our specialized USO Warrior and Family Centers provide some of the most important support systems for service members struggling with mental health during recovery.

These centers – located in Landstuhl, Germany; San Antonio, Texas; Bethesda, Maryland and Fort Belvoir, Virginia – were built specifically with injured, ill and wounded service members in mind. They feature amenities like ADA-compliant spaces, outdoor gardens, communal kitchens and special programming tailored to engage recovering troops with both visible and invisible wounds, who are particularly at risk for suicide.

The USO Warrior Center at Landstuhl is the first of its kind ever built in the world. It is located near the Landstuhl Regional Medical Center in Germany, which is often the first stop for service members who have been injured or fallen ill while downrange in conflict zones. From here, they will either recover and return to the front lines or return to the United States for further treatment – and possibly separation from the military, depending on the severity of their injuries.

Programs at centers like these often include activities such as classes in art, cooking, yoga and music, but they are far more than just relaxing hobbies. These specific activities have been proven to help service members and veterans better express themselves, as well as reduce pain and anxiety. Music, in particular, helps service members cope with PTSD and other injuries as a result of their service.

Geno explained that in fact, one of his favorite activities hosted at the USO Warrior Center is a painting crafts night that happens once a week and is open to the entire base community. However, it is a particularly popular event for service members who are a part of an addiction recovery hospitalization program, who regularly attend the art classes.

“It’s a great way to get out of their heads,” Geno said.

Other activities that are particularly popular with visiting service members are bonfires, hikes in the nearby German countryside and the many homecooked meals that Geno and his team provide for the hundreds of service members in recovery on base, to build that feeling of a “home away from home.”

There are only four USO staff members, including Geno, who put on this wide range of events every day of the week, with the help of a dedicated group of nearly 100 regular volunteers – including service members in recovery.

“Two of my volunteers both were here for suicide attempts,” Geno said. “But I didn’t know that initially.”

Geno explained that these two service members first visited the USO center as patients of Landstuhl Regional Medical Center, but after a while, they became USO volunteers and earned over 300 volunteer hours, helping run the center and its events alongside USO staff.

One day, Geno and one of these volunteers were doing lawn work outside of the USO center when the volunteer decided to open up and share why he was currently receiving medical treatment at Landstuhl: he had attempted suicide.

“He said, ‘Well, life gets hard, and I got a lot of punches thrown at me and I just thought it was time to go.’”

What followed was an incredibly touching conversation. Although Geno knows that one conversation cannot simply solve such a challenging issue as mental health, and that change doesn’t happen overnight, this continuous offering of support – even through something as simple as gardening – can make a difference in the lives of our service members.

“It’s amazing – you just talk to somebody. That’s why I say, ‘always be kind’ and just see what happens,” Geno said. “You don’t know what a simple ‘hello’ can do.”

Many of the service members on base must spend weeks or months in recovery in Landstuhl, where they are disconnected from both their loved ones back home and their units out in the field. This isolation from their networks of support can take a toll on them as they get back on their feet, which is why the USO Warrior Center exists – to fill that gap with familiar faces, engaging activities and a comfortable place to turn to for injured and ill troops far from home.

“We became like their family until they got back to their own families,” Geno said. “It’s a pretty profound mission.”

And that commitment to these service members is carried through right up to the moment they depart for home. Once a week, service members are prepped for a medical transfer flight back to the United States, where they will either receive further care or return home. And each week, the USO is there with a hot breakfast, served to them as they wait for departure. Later, as they are loaded onto the plane, the USO provides each service member with a care package filled with snacks and handwritten cards with notes of encouragement to carry them through their flight back home.

“We don’t want to leave anyone behind,” Geno said.

No matter where our service members are on their recovery journey, they are never alone, and the USO is always prepared to support them along the way.